The notes of CEO from India - country, where 300 million people are waiting for your application

India is the Mecca not only for technical support, but for developers in general, and also as a hatchery for startups. How does tech business in this country differ from the Czech Republic? India is the mecca not only for technical support, but for developers in general, and also as a hatchery for startups. How does business in this country differ from the Czech Republic? Why networking is essential here or how can a local development studio break through there?

We talked about this with our CEO Vratislav, who returned from a technological innovation trade mission organized by the Czech Republic Embassy in Delhi. Describe how the mission went in India.

We arrived in Bangalore, a local IT and developers' mecca called Silicon Valley of India.

It was logically the first destination of our Czech technology mission and we found out how startups, business and technology in general work here. Recently, a Czech incubator itself was established here.

We spent 2 days in Bangalore and during that time we had several meetings with government officials. We also met the Prime Minister of Karnataka, one of the southern regions. All the time we felt strong motivation from the India side to cooperate with Czech startups.

In short, it is obvious that the Czech Embassy is trying to deepen Czech-Indian business relations and they were successful so far. The results may not be so tangible yet, but the activity is so enormous that it will change soon.

You've mentioned it a little, but what was the goal of mission?

The goal of the mission was basically to introduce Czech startup companies to the business environment of India - like a Czech Technological Mission.

The embassy, namely Milan Hovorka and Milan Dostál, are very keen to help the Czech startups break through to India to do business there, Vice versa, Indian startups want to spread to Europe through the Czech Republic.

During 4 days we received information from the local government on how it works in the country - from government investment organizations to large businesses. For example, we visited the Infosys company, which has over 200,000 employees worldwide. Their campus is an incredible place with 90 roads with golf carts riding around. At the time of our visit there were 20,000 people and it was a completely different world.

India's differences have shown a lot here, with either terrible poverty or extreme wealth. And we were also experiencing the differences of successes and failures, for example, one day we met horrible people, the next day we met great people… So the mission was extremely interesting to me in that we saw a cross-section of what the Indian market has to offer.

Although it is not possible to expect a lot of orders and connections during the first mission, it is true that thanks to the embassy we had a lot of contacts.

You said this mission was for startup projects, so who traveled with you besides SYNETECH?

It was focused on SMEs, which means small and medium enterprises.

Both the Czech Republic and India want to support them, because they are the economy backbone for both countries.

Five other companies traveled to Asia with us, but there were really just two SMEs. We, SYNETECH, and pikto.Digital. They specialize in digital textile printing, which is a big topic in India, because a lot of waste is created during that time. But this company does everything without waste, and their technology does not consume water, which is really revolutionary. In addition, representatives of Kiwi.com, the future unicorn from Brno, people from the Academy of Sciences, who presented different ways of using biotechnology, Czechinvest, and also a company called Pragotherm, which has a painting mixture that removes molds and bacteria and so it should last many times longer. Their goal is to paint the Taj Mahal in India. 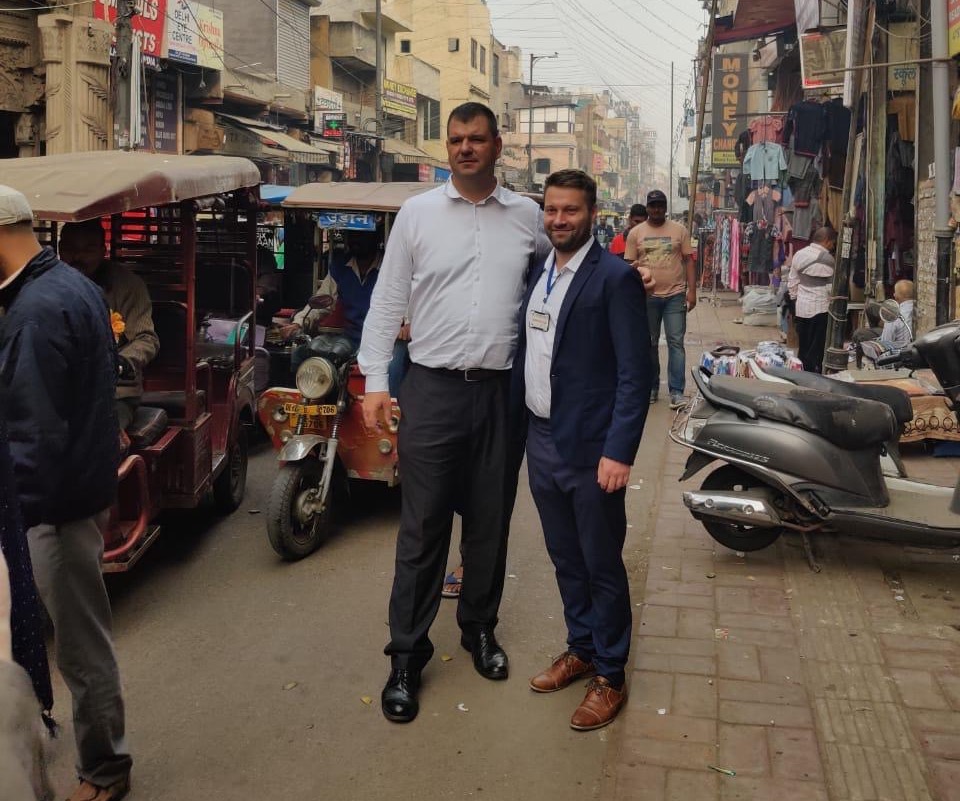 Could you describe what a day on the mission looked like?

So we woke up at 7:30 in the morning and went to see one of the incubators, and the plan was strained at maximum - meetings and meetings again - like people from similar accelerators or the Presidium of the aforementioned Infosys corporation. In addition to meetings with company representatives, we could take a look at their stunning campus.

In India there is ubiquitous dirt, people ride wherever they want, blow their horns, dust everywhere… And suddenly you come into an area behind a huge fence, where there are different shapes of buildings, greenery, happy people walk here… Modern, beautiful and incredible green world cut off the rest of India.

And then we drove to the airport, which took about 2 and a half hours. The local transport is incredible, because we were in a city that had 8 million people, almost like the whole Czech Republic. But we managed everything and flew to New Delhi, where we arrived around 11 pm. There, our ambassador got a great idea that we could go to his place for a drink and we finished at 4 am. And then get up again at 7 am for a new day full of meetings, visits to incubators.

What else surprised you there?

For example, in New Delhi, we visited an incubator focused on mobile technologies such as IoT, artificial intelligence, mobile applications and augmented reality. They have different floors where startups can go according to their specialization and work on a technology they need.

It seemed extremely interesting to me in terms of the fact that there are a lot of business incubators in our country that are dedicated to business in general, but the Indians have a very strong aiming for specific technologies and focus on development around these segments. Perhaps it pays for them because their market is extremely focused on mobile phones and they adopt mobile technologies really fast.

Within a few years, the goal is to modernize the entire country - to build 100 smart cities across India, to deliver mobile phones to 400 million people (currently 300 million people have them). And the government is extremely helpful in this endeavor.

Back to the mission - besides the fact that you presented yourself, you certainly gain some knowledge. What was that?

For example, in India it makes no sense to act as a custom-built application developer, because the locals will do it for a fraction of our price, although the quality may, of course, vary. For Czech startups, other things are more important. The Czech Republic position in the heart of Europe is crucial for us because we can act as a partner for the European market.

The government here supports mobile technology a lot, and if someone comes up with a really interesting one, it will adopt incredibly quickly.

In our country, we use 4 phone apps on average, in India it is around 20.

After so many meetings, can you tell if and how the business is different in our country and in India?

The differences are enormous. We offer the quality of our services and of the technological solutions, but in India it works so that when good relationships are established between two people, the business simply happens and nothing else is looked at. I do not want to say that quality is not important to them, but the most important is the relationship and perhaps the fact that I know that my counterpart in the second company has a dog called Ťapka :) To create close relationships is the basis.

And is India IT-specific in something?

That's a lot about the culture, for example they can't say no. They don't want to be negative, so they say, "Yes, it will be" and so on. In IT, this occurs when you approach a deadline and ask an Indian if he is managing it, he always tells you yes. It's not that they're lying, but they just don't want to say no. This is a huge disadvantage of local culture, they mean it well, but then it is more complicated in business…

It's also very difficult to find people you can trust. I do not want to say that there are not good programmers, there are and there are many, but one has to make a bigger sieve and manage who to accept or not. There are a lot of people you don't want to talk to at all and the people of high quickly are few. But they are here and can be found.

What are you taking from the mission?

Definitely that we have a great embassy in India. We are a geographically small country, but there is a lot to hear about us. And I also realized how small we are in the Czech Republic and certainly we should and must expand. As the Infosys president told me, and he is right - if you do not expand, you do nothing. So we are supposed to have at least 250 people next year (laughs). But the lessons applicable to all? Expand and don't be afraid of it! India is one of the ways.

Learn how to work on a global project in practice. SYNETECH has been working with Oriflame on a worldwide application for 5 years, so we've put together our advice, tips and insights.